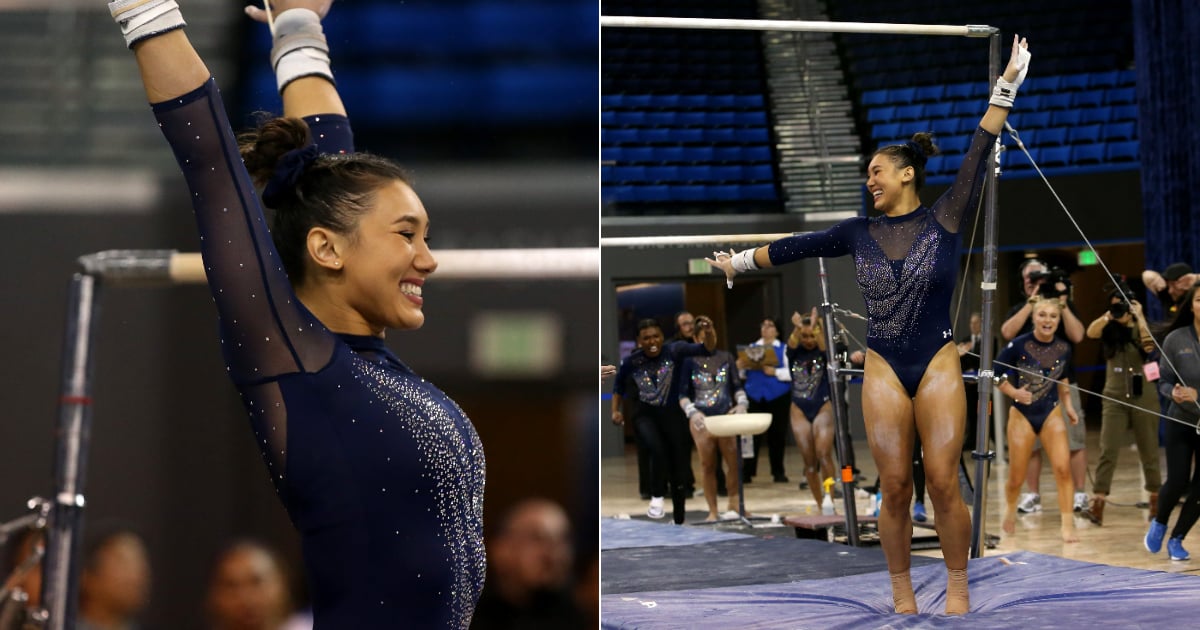 Kyla Ross knows how to attain that elusive perfect 10 in collegiate gymnastics — she received the most 10.00s in the 2019 NCAA season. And, at UCLA’s opening home meet of 2020 on Jan. 12, Kyla’s clean lines, pointed toes, and stuck dismount earned her a 10.00. This was UCLA’s first perfect 10 of the season and, according to Pac-12 Network, this was Kyla’s first time getting a 10.00 on bars at a home meet. UCLA ended up beating Boise State 196.800 to 195.475, and Kyla’s score, as you’d expect with a flawless bar routine, earned her first place on the event.

Kyla, a member of the “Final Five” women’s gymnastics team at the 2012 London Olympics, is the first female gymnast to win Olympic, World, and NCAA titles. Not to mention, last year she became the only NCAA gymnast in history to complete two “gym slams” in a single season (meaning, she got 10.00s on all four events at least twice). She’s now up to 20 perfect 10s in her career so far, reportedly eight away from tying the record in women’s collegiate gymnastics and nine away from beating it.

“As my job as an anchor on bars and the other events, I really just want to be there for my team,” Kyla said after her bar performance on Sunday. This is, she explained, what keeps her motivated. “I love competing, and gymnastics is such a fun sport for me, and I’m also here to inspire all the young girls out there watching us.”

Check out Kyla’s beautiful perfect-10 bar routine here. You’ll see her team members and new UCLA head coach Chris Waller, who was promoted as the replacement for longtime leader Valorie “Miss Val” Kondos Field, go wild when she sticks the double layout landing! One badass gymnast you won’t see there is Katelyn Ohashi; she graduated last Spring. Kyla has taken Katelyn’s place among the graduating seniors on this seven-time-national-championship-winning UCLA team. And if she performs like she did last season, she’ll be going out with some more spectacular textbook routines!

I DID A 3 DAY JUICE CLEANSE & THIS IS WHAT HAPPENED | The Glam Belle
Sheet Pan Thanksgiving Dinner for Four
Flared Leggings Are Back, and These are Our 8 Favorites
Oats Pomegranate Smoothie | Oats Recipe for Weight Loss | #weightloss Smoothies | 2 Mins Breakfast
One Simple Exercise Routine To Tone Your Flabby Arms | Better | NBC News
Follow us on Facebook
Follow us on Twitter