As the alarm sounded at 5:45, bleary eyed I stowed my suitcase in the boot of mum’s car and after one last check of all the paperwork we were off to Gatwick. Bag drop was smooth and despite a small delay at security (I forgot to take my energy gels out of my carry-on before the x-ray scanner), it was a relaxed journey. I had a momentary panic at Belfast International Airport when I realised, I didn’t know how the transfer was going to work. Fortunately, someone appeared clutching a clipboard with Antrim Coast Half Marathon on it. There were a few others who’d come in on a flight from Birmingham on the minibus as well. The ‘elite’ elites were staying at the main event hotel in Larne itself, while the rest of us were in the Ulster University Jordanstown student accommodation. After collecting my keys and dumping my bags, I headed out for an easy 6-mile shakeout run. Strava’s auto route function picked a decent loop through the town and back along the coastal path. I did a few strides after; the legs didn’t feel too bad from the travel.

The next key event was the technical meeting. As this was at the main hotel in Larne, a shuttle bus had been put on for those at Jordanstown. The technical meeting was relaxed as the race organiser outlined the procedure for the following morning as well as the on-course setup. The lead pacemaker would be going out at 58:30 pace. Something that only affected about 5 people in the room. The meeting wasn’t essential, but it was a chance to collect my number and wristband, one less thing to do on the morning of the race. When we got back to Jordanstown, it was time for some dinner, a simple margherita pizza and a premade pesto pasta salad. I hadn’t expected self-catering to mean I had to bring my own crockery as well. Fortunately, pizza boxes also double as a handy plate. About 9pm I headed to bed as another early start awaited me. 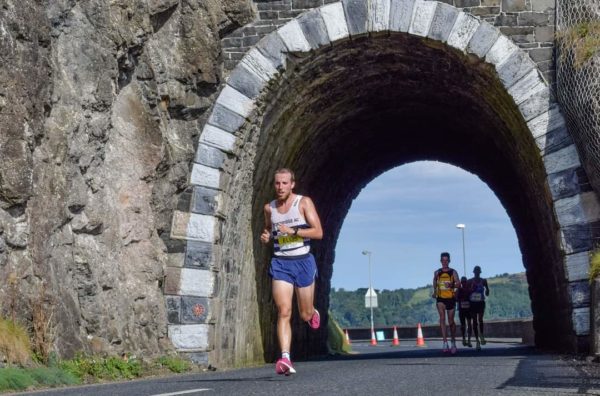 I was surprised to wake before my alarm. The bird outside my window insisted I wake up though. It was 5:20, about 15 minutes earlier than planned. The race started at 9am and the shuttlebus left at 7am. Breakfast was an instant porridge pot and a bottle of Maurten drink 320. After checking my rucksack for the essentials of race shoes, vest, and gels, I headed out. It was a crisp morning but not cold as I climbed onto the bus.

A 30-minute drive through the Irish countryside gave a chance for me to run the massage gun over my legs and eat my usual pre-race banana and cereal bar. The elite warm up area was in a local park about 300m up the road from the start line and consisted of an outside basketball court with a few gazebos up. There were excellent views across to Scotland and the other side of the harbour. As everyone started carrying out their own individual pre run routine I got the opportunity for a quick chat with Callum Hawkins. He was glad to be back racing after a torrid time with injury; many others in the running world are also pleased to see him back as well. I headed out for a quick jog about 50 minutes before the start and was amazed how slow the Ethiopian contingent was jogging.

As I was elite category B I had to head to the call room at 8:40. I made sure I had my gels in my pocket and laced up my racing shoes. I’d decided to wear the Saucony Endorphin Pro 3. I handed my bag over to the van drivers who’d be taking them down to the finish area and jogged over to the start. This is where I realised having a disposable bottle of water to sip on would have been a good idea. The marshals were fantastic and happy to take the rubbish from my Maurten CAF100 gel that I took about 5 minutes before the start. They called us up and began to introduce the main contenders in the race. At 9:00 on the dot the hooter went and the race headed off. I’d found a guy who was aiming for 68:30 and we’d agreed to work together for a bit.

After the first kilometre, we were spot on at 3:15. It was amazing how quickly the race had spread out and a group of about 12 was about 20m up the road. Annoyingly my watch decided this was a perfect time to glitch out and restart. Now running ‘blind’, I was able to rely on the generosity of the other guy as he read the splits each kilometre to me. As the route wiggled through Larne town, I went to take another CAF100 gel just as the other guy put in a little surge and he got a small gap on me, one that I never managed to close. We were on the coast road by this point, and I just focused on trying to keep the larger group in my sights with the intention of picking a few off. I went through 10km in 33:03 so had lost a bit of time.

About 12km in, the large group had broken up and I’d caught one or two. The leaders were past the turn point and flying back past me on the other side of the road back. The leading Brits looked like they were paying the price for going with the 58:30 pace at the front. A few others looked to be going well still and I hurled a bit of encouragement their way. I hit 13km and the pre-race plan had been to push hard between 13km and 16km and then hang on over the last 5km. I made the decision not to take my final gel at 14.5km as I didn’t want to faff around with it. I started to slowly close the gap to a few in front and caught a few more guys.

At 17km one of the pacemakers was just finishing up his cool down and pulled over to the side of the road. He gave me a small cheer as I went past. At this point I knew it wasn’t going to be the dream scenario, but a PB might still be possible. As each kilometre marker came and went, I tried to push again. About 3km to go I could feel my hips start to tighten and I was having to follow the camber of the road instead of taking the tangents. About 2km to go a steep bank took us down onto the coastal path. The ramp finished me off and the last 7 minutes of running was very unpleasant. I can’t really describe the movement of running without using your hips, but I was trying to do it. I hobbled across the line in 71:23. After a slurp of water and grabbing my bag I sat down and tried to change my shoes. I had to ask for help from a fellow runner with my right shoe as my hip flexor had completely cramped up.

It hadn’t been the best race but after seven weeks back after a plantar tear it hadn’t been a complete disaster. The course itself was great and, as the winner proved, can be incredibly quick. It was well organised and judging by the setup in the hub for the mass race, that looked incredibly well organised too. It was a perfect race for a nice mix of athletes and an opportunity for those building up for an autumn marathon or coming off the back of a track season. It’s rare to see a race in the UK that has this level of depth. Many of the big city halves will have a small elite field and then a gap to those running 75 minutes. The elite race at Antrim was open to men who’d run under 70 or women under 75. As an opportunity for top level club athletes, there’s very few competitions that offer anything similar. 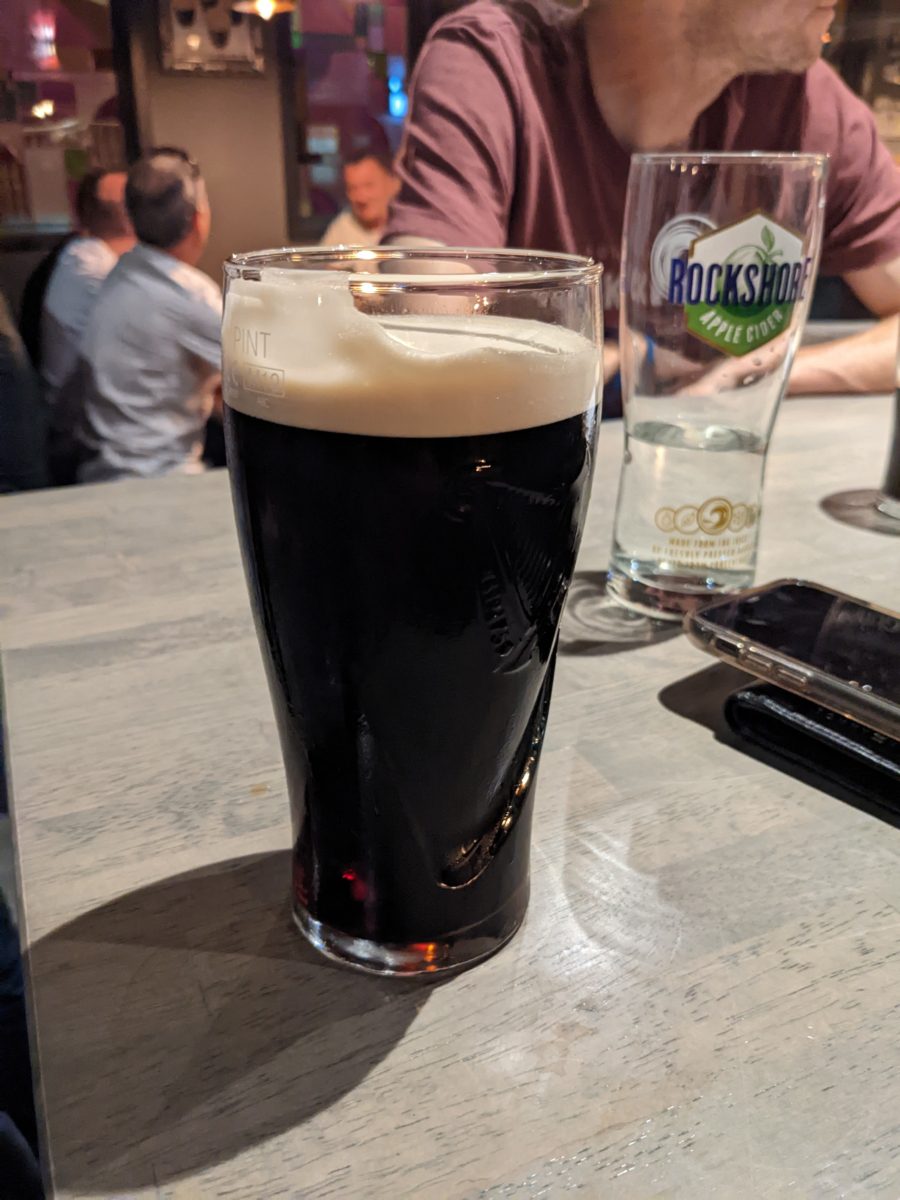 The after party that night was relatively sedate but I got to try my first Guinness, not an unpleasant experience. After a very slow 5 miles on Monday morning the shuttle dropped me back at Belfast International Airport and, despite a few delays, I was back home by 5pm. While the result hadn’t been fantastic, the weekend was great and I’m very appreciative of James, the Race Director, for giving us club athletes an opportunity.