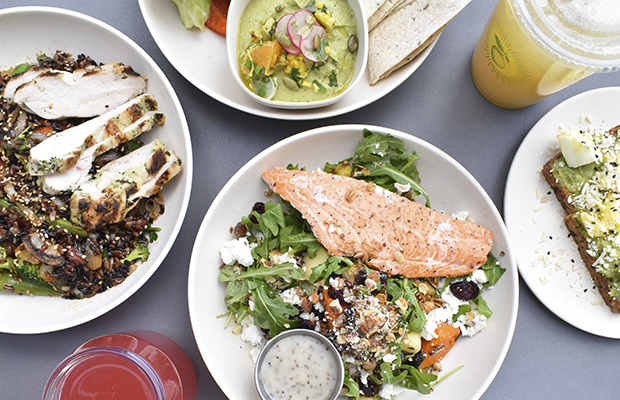 As the year comes to an end and the holiday indulgences just keep on coming (d*mn you, office cookie parties!), you may already be considering a weight-loss plan to try out for the New Year. One that’s been around for years and likely isn’t going anywhere? Cutting carbs. And then there’s keto, the über-popular, high-fat extension of that. But if you’re considering slashing those delicious carbohydrates at all, you might be wondering: What exactly makes keto different from low-carb diets in general? And really, who would win in a low-carb vs. keto face-off?

Let’s start with some background. The ketogenic diet was created in the 1920s to treat children with seizure disorders for whom medication was no longer working. Research had shown that being in the state of ketosis — meaning the body is using fat for fuel instead of its natural and preferred source, glucose—reduced the frequency of seizures. The fat-burning benefit obviously gave this diet its now mass appeal.

Low-carb diets, on the other hand, have also been around for decades, but in various forms. Remember the Atkins and South Beach diets, which gained popularity in the early 2000s? Both prime examples of diet based on minimizing carb intake, especially simple and refined carbs (white bread, pasta, cake…you know, the good stuff).

Even though people often confuse keto with the more generic term “low-carb,” according to Brigitte Zeitlin, a registered dietitian and owner of BZ Nutrition in New York City, they’re actually quite different.

I’m listening. What’s the main difference between low-carb and keto?

First and foremost, keto is a much more restrictive diet, says Zeitlin. While keto is indeed a low-carb diet, not all low-carb diets are keto.

The keto diet has a pretty strict structure, where the person is to consume 70 percent of their daily calories from fat, 20 percent from protein, and 10 percent from carbohydrates. Ten percent of anything, especially carbs, is really not a lot. And some people even take it further, to a 70-percent fat, 25-percent protein, 5-percent carbs breakdown.

Going low-carb, on the other hand, is a bit up to interpretation: What you consider low-carb might mean cutting out every kind of grain or sugar, while to others, it may include eating a piece of fruit or a serving of quinoa. It’s all very relative.

With a general low-carb diet, you’re probably (and hopefully) not eating nearly as much fat as you would if you were trying to force your body into ketosis. Instead, you’re loading up on more lean proteins and veggies to stay full and energized.

READ MORE: Keto Vs. Whole30: These Are The Key Differences Between The Diets, According To RDs

Makes sense…so is low-carb or keto a better diet?

Great Q. While the answer isn’t totally black and white, Zeitlin says that for most healthy people, if you’re trying to lose weight, a low-carb diet would be the better fit because it doesn’t aim to put your body into an unnatural state (ahem, ketosis). Instead, by cutting back on foods that are high in sugar and starches, you’re able to drop weight and still maintain a healthy form of energy for your brain and body to run on.

“Typically, a low-carb diet focuses on protein and non-starchy vegetables, and limits grains, fruits, breads, sweets, and starchy veggies like legumes, potatoes and peas,” Zeitlin explains. Protein and veggies are extremely helpful in aiding — and maintaining weight loss — she continues. Plus, a general low-carb diet can be more sustainable in the long run, since it requires way less macro counting (read: obsessing over hitting that 70/20/10 ratio).

READ MORE: Do You Really Need To Give Up Carbs To Lose Weight?

Hmm. But what if I want to go keto instead?

To each their own! But if you’re interested in trying out the keto diet, just keep in mind that it generally comes with more side effects than a normal low-carb eating plan.

Short-term effects of the keto diet can include “keto breath,” “keto flu,” (flu-like symptoms brought on by the body adapting to this very low-carb diet), or fatigue.

Long-term effects can include constipation, diarrhoea, lack of energy, iron deficiency, vomiting, and kidney stones. Not to mention, eating such a high-fat diet like keto can also contribute to high triglyceride levels, which increase your risk of heart disease and stroke, as well as high cholesterol. Lastly, going keto can also contribute to a weakened immune system (since carbs help boost immunity) and chronic inflammation, says Zeitlin.

It’s also worth noting that keto’s strict carb limits often means drastically cutting your vegetable intake, since many veggies have at least some amount of carbs. That could mean you miss out on important vitamins, minerals, and antioxidants that help your body function at its best. You’ll also likely consume less fibre, which has been shown to prevent heart disease, diabetes, and promote and sustain weight loss.

“When evaluating restrictive diets, you want to really look at the food groups they are removing and research the downsides of eliminating those vitamins, minerals, and nutrients,” says Zeitlin. “Any diet that is restricting your plant-based food intake should give you pause to do more research.”

All that said, if you try the keto diet and it works for you, do you, Zeitlin says. “But if you are someone who is debating which fad diet to try for weight loss, I recommend trying a lower-carb diet that’s not as restrictive.”

Got it. Any advice that applies to both diets?

Definitely! To successfully maintain weight loss from either (or any) diet, Zeitlin advises focusing on doubling your veggies, eating lean proteins (fish, eggs, chicken, turkey, shellfish, lentils, tofu), healthy fats (nuts, seeds, avocado, olive oil), fresh fruit, and whole grains. “That is what is going to help the weight come off and stay off,” she says.

At the end of the day, “you want to create a diet for yourself that feels comfortable for you to commit to for the long-term, so you don’t gain and lose, gain and lose—called weight cycling—and feel like you are constantly dieting.” The first can invite health problems (like insulin resistance); the latter is, well, not fun (or all that healthy, mentally speaking).

Remember, your ultimate goal beyond the weight loss is to become healthier. So don’t fall into a diet trap that sabotages the real purpose for your journey. You’re better than that, my friend.

Jane Fonda Is the New Face of H&M Move, and We Want Every Single Piece
NutriBullet Weight Loss Recipe: Go-To Breakfast
Lose Thigh Fat: Exercise To Reduce Thigh Fat At Home
How Can I Kick Start My Diet? | This Morning
7 Day Healthy Meal Plan (Aug 8-14)
Follow us on Facebook
Follow us on Twitter